Clocking in at an impressive top speed of 25 mph & powered by x2 independent 500w electric motors, This 1000w beast has plenty of torque to tackle some serious inclines and a wide range of off-road conditions. Top all that off with an industry leading range of 20+ miles per charge and you’ll begin to see why the Mercane WideWheel has quickly become one of the best electric scooters of 2019. So let’s take a closer look at what makes the WideWheel so impressive…

The first thing I noticed as I un-boxed the WideWheel Electric Scooter was just how damned good it looked. I’m a sucker for a well designed product and clever marketing. It gets me, every, single, time. The Mercane WideWheel was no exception :). The sturdy black aluminum frame, stylized grip-tape, independent front & rear suspension and bright red caliper with a slotted rotor all combined to make a powerful first impression. There is a phrase that immediately popped in my head after first seeing this scooter in person…

The Mercane WideWheel is like the Cadillac of Electric Scooters.

The very next thing I noticed was that the damn thing was pretty heavy. Weighing in at at roughly 50 pounds, This wouldn’t be the first scooter I would recommend if you were planning on huffing it up several flights of stairs on a regular basis. That being said, all of that power has to come from somewhere. Honestly, I’ll deal with toting around a heavier model electric scooter if it translates into this much torque, range and just a flat out fun riding experience.

First impressions aside, The slick design and impressive technical specs don’t mean much if they don’t translate into a fun riding experience. So the next few sections will focus on my initial riding experience, along with covering some of the small nuances I’ve un-covered after riding the scooter for a few weeks.

Insane Amounts of Power
The first thing you are likely to notice after you power the scooter on is the insane amount of torque and power they’ve managed to jam into this electric scooter. The first time I powered it on and hit the throttle I lost my footing and had to had to give it a second try to compensate for the huge initial burst of power. (Something I’ve seen has been tweaked in the 2019 models.) The massive amount of power these twin 500w electric motors can put out is a refreshing change of pace from some of the cheaper electric scooters I’ve reviewed in the past. Whether I was tackling the hills and valleys of my local oak leaf bike trail or taking it off road, it barely slowed down, no matter the terrain.

Dual-Spring Suspension & Tubeless Tires
The dual suspension and airless wide tires offer a smooth ride and allow you to tackle almost any terrain. I threw everything I could at the thing, and I couldn’t find a hill or off-road terrain it wouldn’t simply destroy. Perhaps some of the more aggressive hills in San Francisco might give it a run for it’s money, but beyond that hypothetical I think you can feel pretty confident in your purchase if you plan on tackling tougher terrain and steep hills. To be honest, this was the first tubeless tire electric scooter that I’ve rode in awhile, and while the idea of never having to deal with a flat while away from home is very appealing, I feel like it does make the ride just a tad bit bumpier in exchange. That said, the dual front and rear suspension chewed through bumpy terrain, sidewalk cracks and potholes without issue. All-in-all, It’s definitely a welcome change from the rigid nature of many 1st generation electric scooters.

Impressive Top-Speed
I nearly completed this review without even realizing my electric scooter shipped with “eco” mode enabled. Turns out that by changing this to “standard” mode via the LED interface on the handlebars the top speed goes from “meh, about average”, to “holy shit – I don’t this is good… I don’t need to go any faster”. I think in reality the difference is probably around 18mph to 25 mph, but man what a difference it makes! Aside from the somewhat awkward settings  menu to adjust the power mode – I have no complaints in the speed department here. What’s even more impressive is that it maintained nearly full throttle while hitting up hills, bumps and going off-road.

Tough-As-Nails Construction
The last thing I would ever concern myself with is breaking this thing. You can feel the heft and rigidity of the scooter when you un-box it and get it ready to ride for the first time. The thing just looks and feels like it was built to last. Heck, even the kick-stand immediately stood out as higher quality than what I would typically see on most electric scooters. The weight limit reads 200 lbs on their Amazon listing, but I’m pushing nearly 230 lbs and that didn’t seem to bother the scooter one bit.

The Settings & Modes Interface
The only genuine complaint I think I had during my experience with this electric scooter was that the interface for changing settings and power modes felt un-necessarily clunky. Now that being said, I’ve read that this is actually an issue they have since addressed in their new 2019 line. The model I was shipped was a late 2018 Widewheel so I can’t speak to any improvements that were planned here – but It’s got to better than the menu I experienced 🙂 To be completely fair to the manufacturers though, I haven’t been impressed by an electric scooters interface yet. I would gladly give them a 10/10 in the features department if they added a digital display or integrated a smart phone app to easily navigate the scooters interface in lieu of it’s current LED only interface.

The thing rides like an absolute dream, on-road or off, it powers through difficult terrain and has the battery power to back it up. The dual suspension, airless tires and beefy construction mean you genuinely only have to worry about protecting the rider and not the machine should you get into a sketchy situation. The one draw-back to the wide wheel design however is that the turning radius suffers a bit. While I wouldn’t ever recommend making sharp turns while near full speed, when you are ready to slow down and take a corner you quickly learn to plan your path. While it can still make sharp turns…It just feels… awkward. At about 35 degrees or so, you can almost feel all of that chunky wide wheel traction start to disappear.

That small quirk aside – I loved the super wide deck, the handlebars and steering always felt on-point, whether I was going full throttle or coasting. The braking and acceleration placement felt natural and there was never too much resistance to where I would be concerned about using it over long rides. Braking felt responsive and snappy and while the acceleration took some getting used to, I always felt comfortable and in control behind the handlebars of the WideWheel.

After several weeks of putting the Mercane WideWheel Electric Scooter through it’s paces, I have to say.. I am pretty damn impressed.

I think you would be hard pressed to find a comparable scooter in this price range that meets or exceeds the WideWheels specs, and unless you plan on hauling this monster up a dozen flight of stairs every day to commute – I truly think you can’t go wrong pulling the trigger on this purchase. If you have any questions about my experience with the Widewheel or just want to share your own feedback – I’d love to hear from you in the comments.

I've Charged The Scooter, But When I Press The Throttle Nothing Happens...

Don’t panic – Nothing is wrong with your scooter.

This is actually by design, as with most high-end electric scooters the motor will not engage until you manually kick-off and get a bit of speed going. Be careful on your first few tries though, the WideWheel has a seriously impressive amount of torque!

If for some reason you don’t like this feature, you can disable the kick-off feature in the settings menu. See the FAQ section below for more details.

Is This Scooter Designed To Allow The Wheels To Spin Freely When The Motor Is Disengaged?

While the scooter is obviously designed to be ridden while under power, if you are forced to operate the scooter while not powered on, you can treat it as a kick scooter until you are able to re-charge it. That being said, you should avoid depleting the battery entirely when possible to extend the life of your battery pack.

What's All Covered Under Warranty?

The owners manual isn’t very explicit about what is covered or for how long. I’ve reached out to the manufacturers to get more information, but as a general rule of thumb, if you encounter any issues, the sooner you contact the manufacturer, the better.

What Can I Do To Extend Battery Life?

Generally speaking, you will want to follow standard best practices when using any lithium ion battery. Specifically the following 3 tips will have the most impact on your battery life.

Here’s a quick reference guide for adjusting the various settings on the WideWheel.

Did I Miss Anything?

If you still have questions, please let me know in the comments!

Alternatively, The WideWheel owners manual or this great /reddit thread from other widewheel owners is a great source of additional information.

Incredibly Rugged, stylish and one of the most powerful electric scooters money can buy. With 1000w of power, unparalleled range and speed the Mercane Electric Scooter is an excellent buy. The only meaningful down-fall is that you trade portability for power as the unit is a tad on the heavy side, if your commute includes flights of stairs or a few bus routes you may want to consider a lighter alternative.

Full Disclaimer: FluidFreeRide was generous enough to ship me a trial unit to review in person over the course of several weeks. While I thoroughly enjoyed my time with the scooter, I’m committed to providing an unbiased opinion, as always. TransportationEvolved.com does not (and never will) exchange gifts, donations or favors in exchange for a favorable review. 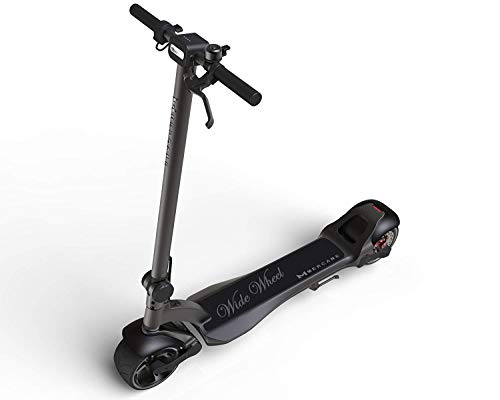 Could This Side Hustle Be For You? Becoming a Contract Charger 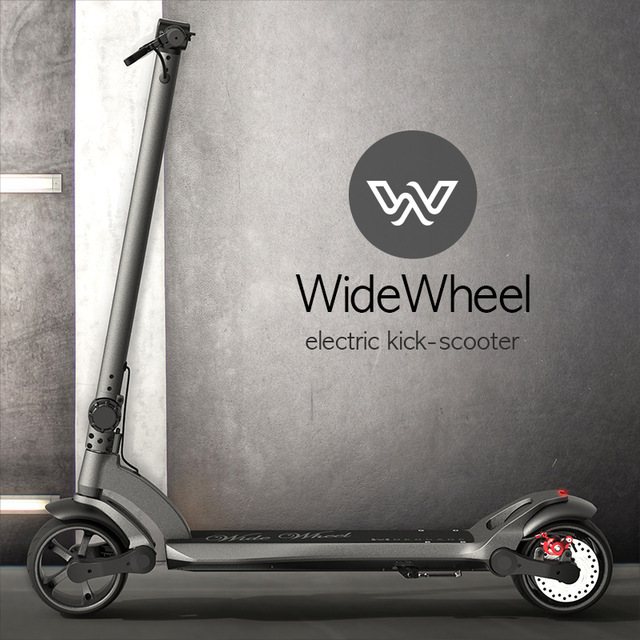 TransportationEvolved.com is a participant in the Amazon Services LLC Associates Program, an affiliate advertising program designed to provide a means for sites to earn advertising fees by advertising and linking to Amazon.com.

Amazon and the Amazon logo are trademarks of Amazon.com, Inc, or its affiliate.